“And Tamar went to her brother Amnon’s house, and he was lying down. She took dough, and kneaded it, and made the pancakes (levavot) in his sight. And she brought the pan to him…” (II Samuel 13, 8-9). 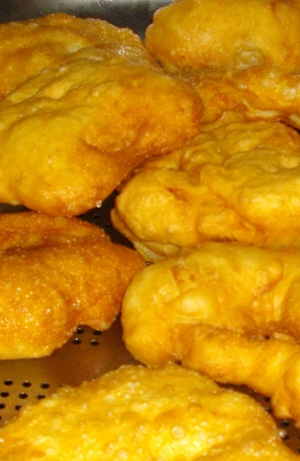 The pancakes Tamar made for her brother Amnon were meant to cure him from his illness. This pancake contains whole wheat honey and oil – ingredients that are rich in calories that give a great deal of energy.

30 grams of sourdough
250 ml water
300 grams of whole wheat flour
(it is possible to use even a little bit more than that)
½ tablespoon salt
Olive oil for deep frying
Heated and spiced honey or date honey (silan)
Preparation:


Mix the sourdough, water and salt in a bowl
Add the flour and continue mixing until it becomes dough.
Cover it with a damp towel and allow it to rise for 8-12 hours
Add to the bowl 2 tablespoons of oil, then roll the dough out to a thickness of approximately 1 cm.
Using a drinking glass, cut out the pancakes (latkes) into circles.
Let them sit for about 30 minutes
Heat up the oil in a deep frying pan or a wok, then fry the latkes for
about one minute on each side
Using paper towels, soak up the excess oil from the latkes
Por the honey or silan over the latkes, then allow them to cool.
Eat and enjoy!
Happy Hannukah !