On Words and Fragrances

On Words and Fragrances 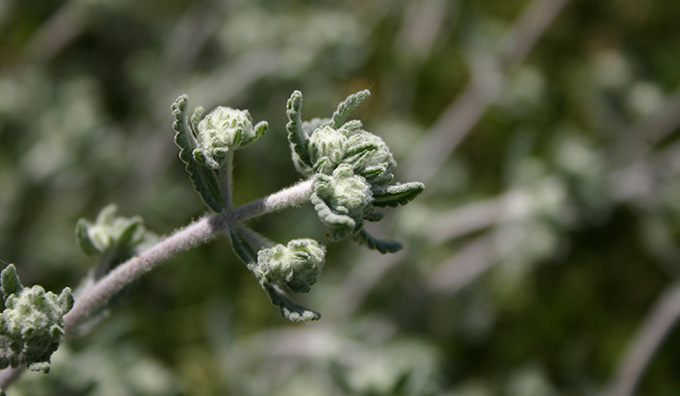 The prominent aroma of the felty germander (Teucrium capitatum) includes it among the many fragrant plants that enrich the wonderful fragrances of the mountains of Israel, to which the woman in the biblical Song of Songs sends her beloved “Make haste, my beloved, and be like to a gazelle or to a young deer upon the mountains of spices” (Song of Songs 8,14).

The germander is a branched shrub, all of whose parts are covered with a filmy white hair that help protect it from transpiration, which enables it to blossom in hot weather and prevents it from having to compete with pollinators, such as bees and ants. The leaves are pleasant to the touch and grow straight from the stem without petioles (the stalk that usually attaches the leaf the stem) and curl downwards. The small white flowers are clustered closely together and the plant is characterized by a prominent “lip” in its bottom section. It blossoms in the summer, between April and August.

The germander is very common in countries around the Mediterranean Sea, and in Israel can be found from the Hermon in the north to Eilat in the south, in the Mediterranean vegetation areas as well as in the damp parts of the desert. There are about 300 types of germanders, eleven of which are in Israel. The germander has a very unique, prominent aroma and a very bitter taste, yet it nevertheless used as a medicinal plant for many complaints. It can be used for healing wounds, relieving pain, fever, diabetes, asthma, digestive difficulties, respiratory problems, for women during their menstrual cycle or for morning sickness, improving vision and memory, calming babies, and more. Nissim Krispil, known for his research of plant folklore, called the germander “the queen of medicinal plants.”

Noga Hareuveni, the founder of Neot Kedumim, and his sister Ayelet Hashahar, identified the germander as the “Greek hyssop” plant often referred to in traditional Jewish sources. For one thing, this was based on its bitter taste, for the Sages taught that “a man may fulfill his obligation on Passover for bitter herbs…with hyssop, but not Greek hyssop” (Babylonian Talmud, Sukkah 13a). The Hareuvenis also identified it based on the Greek hyssop’s reference as a medicinal plant, “It is unlawful to eat Greek hyssop on the Sabbath, because it is not food for healthy people” (Mishna Shabbat, 14:3).

Scents and fragrances enter the body through the nose, thus making a clear connection in Hebrew between the wordf “breath” (neshima), which gives life to the body, and the word “soul” (neshama), representing both the spirit and the individual personality of a person. Our Sages drew an additional connection between “smell” (re’ach) and “spirit” (ru’ach). “What does the soul enjoy that the body does not? You must say that it is smell.” (Babylonian Talmud, Berachot 43b).

Smell (re’ach) and spirit (ru’ach) were also essential elements of the day-to-day service in the Holy Temple. Every evening, when the priest prepared the candles of the menorah in the Holy Temple, he burned incense beside it “And he shall take a full vessel of coals from the altar before the Lord, and fill his hands with finely beaten incense” (Leviticus 16:12). Resins and plants were burned over the coals to spread the lovely aroma.

A similar custom was practiced at the end of hearty meals in Mishnaic times. “The special incense is only brought at the end of the meal” (Mishna Berachot, 6:6), and on the Sabbath eve “They bring the incense on coals on Sabbath eve” (Tosefta Shabbat, 1:11).

The Aramaic word for “coals” is gumra – whose root, g-m-r, is the same root as the Mishaniac period word for incense cited in both sources – mugmar. The very same root is found in the word Aramaic word Gemara, which indicates learning, and is the name of the Babylonian Talmud. This shared root is the basis of the connection between smell (re’ach) and spirit (ru’ach).

The sixth day of the Hebrew month Sivan, when the germander plant is in bloom, is referred to as the “Festival of the Giving of the Torah,” the day which, according to our Sages, God gave the Torah to the Children of Israel at Mount Sinai. According to Rabbi Yehoshua ben Levi, every word that the Israelites heard when receiving the Torah was accompanied by a wonderful aroma. “With each word that came from the mouth of God, the entire world was filled with spices” (Babylonian Talmud, Shabbat 88b).

Thus, with the prominent presence of the fragrance (re’ach) of spices, the first words of the Torah were received by the Children of Israel, the spirit (ru’ach) of which up holds the Jewish people and its heritage. It is the Torah whose wisdom generations upon generations of scholars and researchers have yet to exhaust, as the 12th century Spanish Jewish philosopher Rabbi Yehuda HaLevi wrote in his great work, The Kuzari, “I see that your Torah consists of all wisdom – from shallow to deep” (Kuzari 2,63).