Musings for the New Year

"Go out and see what are the best traits a man can acquire" (PirkeiAvot 2,9)

The late summer reigns over everything. Israel is marked by dryness, heat, cracked earth, most of the plants are withered and covered with thorns. Amidst this growing demise, we turn the page to a new year, bringing us to the 1st day of the month Tishrei, a date that has no connection to the changing seasons, but rather to our oral and written tradition.

Every year on this date, mankind crowns the King of Kings, thus reaffirming the unity and the oneness of the Lord. According to Jewish tradition, on this date God created man – the final act of the creation of the world. As is appropriate for receiving a king with joy and the sounding of trumpets, the Torah referred to “the seventh month on the first day of the month will be ….a memorial of the sounding of trumpets, a holy festival” (Leviticus 23:24).

Earth and the heavens, matter and spirit – everything needs a new beginning. Yet every new beginning comes with hesitation: what is the best way to choose a new path? The prophet Jeremiah counseled “Stand on the roads, look and seek among the ancient paths the good road. Walk it, and find serenity for your soul” (Jeremiah 6:16). The Sages of the Talmud discussed this and offered several possibilities: “Rabbi Eliezer said, ‘a good eye.’ Rabbi Yehoshua said ‘a good friend.’ Rabbi Yossi said ‘a good neighbor.’ Rabbi Shimon said ‘to see what is born (from one’s actions).’ Rabbi Elazar said ‘a good heart.” (PirkeiAvot 2,9). 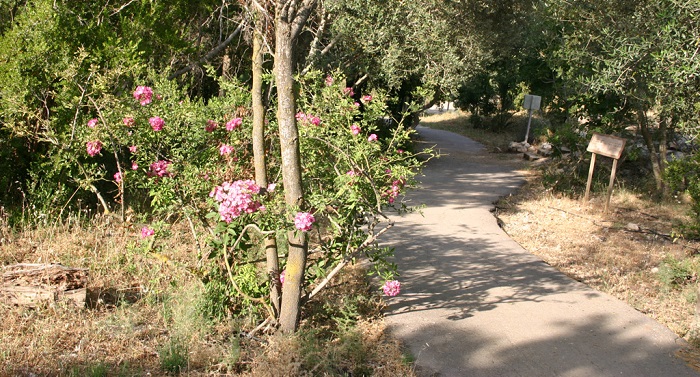 “One which had thorns at its beginning, and a smooth plateau afterwards…” (Fhoto: Noga Hareuveni, Neot Kedumim)

Midrash Tanchuma(1) gets down to the nitty-gritty and incorporates nature into this complex issue. According to the Midrash, Moses already gave the Children of Israel advice in the desert on finding the right path, when he clarified for them their choice – the right path would bring a blessing and the other path a curse. “See that I am placing before you today a blessing and a curse ” (Deuteronomy 11:26) . (2)

The Tanchuma depicts the dilemma with a homily about an old man, who was wise and experienced. He was standing on the intersection of two paths – one which had thorns at its beginning, and a smooth plateau afterwards, and the other started off as a smooth plateau but had thorns further on. According to the Midrash, the old man “stood at the intersection and warned all who came by: ‘although you see the beginning of this road has thorns, you should take it, because it ends smoothly. Those who were wise listened to him and traveled that road. At first they wearied, but they went in peace and arrived in peace. Those who did not heed (the old man) went, but failed in the end.”

The midrash presents us with two conclusions. First, there are no paths without some thorns along the way. Second, you can allow for them and still succeed.

The thorns enable us to see a world filled with symbolism. They adorn the landscape at this time of year, and are commonly found in our sources under many different names, evidence that they held a central place in the lives of our forefathers. On the 4th of Heshvan this year (October 28), Neot Kedumim will mark 7 years since the passing of its founder, Nogah Hareuveni, with a special day of learning, focusing on “Thorns of Israel” in art, song, nature and parables.

May the New Year be one of blessing for us all, and may we choose the right path.

(From the song “On Rosh Hashana.” Written and composed by Naomi Shemer.)

(1) A collection of biblical homilies (aggadot), it dates back to the 5th century CE, if not even earlier.

(2) A similar idea is found in Deuteronomy 30:1 – “And it shall be that all of these things shall come to you – the blessing and the curse – that I have set before you.”