"White Spring" – a humble plant with an important message

Once again Israel is enjoying its seasonal abundance of plants as the land begins to be covered in green with the start of the winter rainy season. Among the flowers all around us, some are better known, others less so. Some are common, others quite rare. This essay will focus on the Anthemis palaestina, the Israel chamomile, a member of the familiar daisy family.

The Israel chamomile daisy is very similar to the common chamomile (Anthemis pseudocotula). Chamomiles are small plants that bloom in large groups, giving the appearance of a large white carpet with yellow dots.

The Israel chamomile is such a common flower that people often fail to look at it closely. But familiarity should not breed contempt: this flower has a rich story and an important lesson to impart.

The plant’s Hebrew name, kachvan, is reminiscent of the Hebrew word for “star”, but that is somewhat misleading. In the period before the establishment of the State of Israel, the Academy of the Hebrew Language was the body responsible for helping re-establish Hebrew as a modern, spoken language. When naming plants, one method used by the academy was to “Hebraize” the common Arabic names. 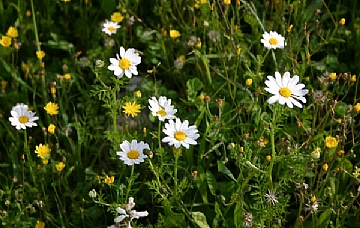 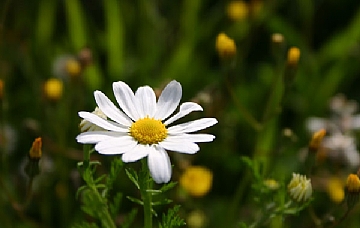 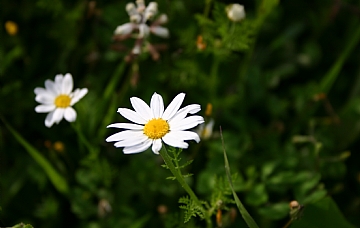 The chamomile was known in Arabic as kachwan, which the academy transformed to kachvan in Hebrew. Ephraim and Hannah Hareuveni, and later their children Nogah, the founder of Neot Kedumim, and his sister Ayelet Hashachar, opposed this method of naming plants and sought purely Hebrew names that highlighted their special characteristics, concomitantly searching for references to these plants in biblical and Talmudic sources.

In this particular case, the Hareuvenis identified the kachvan as the flower that Jesus speaks of in his powerful parable on faith. Among the many lessons and messages recorded in the New Testament Jesus time and again speaks of trust in God. Is man meant to spend his life worrying about his livelihood or should he trust in the Lord?

In preaching the answer to this rhetorical question, Jesus refers to nature and he asks his followers to consider the birds. They do not sow or reap, yet they always have food to eat because the Lord provides for them. Yet man, constantly fearing for his livelihood, lives in great fear and trepidation. But Jesus teaches that should man should strive to emulate the birds and trust that God will provide his needs as He does those of all of His creatures. “Therefore I tell you, do not worry about your life, what you will eat, or about your body, what you will wear…Consider the ravens: they neither sow nor reap, they have neither storehouse nor barn, and yet God feeds them. Of how much more value are you than the birds!” (Luke 12:22-25, New Revised Standard Version)

Jesus continues and asks his followers why they worry about being clothed. “Consider the lilies, how they grow: they neither toil nor spin, yet I tell you, even Solomon in all his glory was not clothed like one of these. But if God so clothes the grass of the field… how much more will he clothe you” (Luke 12:27-29, and Matthew 6:28-30, New Revised Standard Version).

Commentators have offered several possibilities as to as to the identity of Jesus’ lilies of the field, including the madonna lily (Lilium candidum), Marigold buttercup, Gladiola, Lotus, Crocus, Tulip and the Iris. However the Hareuvenis believed that Jesus was referring to a plant that his audience would know. The plant would have to be common and easily recognized, covering the area like a blanket when in bloom. The Hareuvenis indicated that this was the kachvan, the chamomile daisy, that makes a stunning sight spread across the land, and based on the time of year, the Hareuvenis gave the flower the name “white spring” – aviv lavan.(1)