A small plant gives birth to great drama – the Mandrake

As the Hebrew month of Tevet begins, the hills and valleys of Israel are covered with an abundance of green, and here and there between the rocks one stumbles upon a circlet of large, dark green leaves, surrounding a cluster of small, bell-shaped, purple flowers. This is the Autumn Mandrake (Mandragora autumnalis) a member of the Solanaceae, or Nightshade, family (which includes other, more familiar, plants such as eggplant, potato and tobacco). The quick blossoming and relatively early flowering of the mandrake is due to its thick root that stores minerals from previous seasons. This low-growing plant is at the heart of a dramatic story that demonstrates the deep connection our biblical ancestors had with the flora of the Land of Israel.

Our story begins during the summer wheat harvest: “And Reuben went out during the harvest and found mandrakes in the field, and he brought them to his mother Leah…” (Genesis 30:14). The relationship between the Patriarch Jacob’s two wives was extremely complex – two sisters sharing a husband. Rachel is cherished yet barren and Leah “despised” yet fertile, bearing Jacob many children. Leah’s eldest son is Reu-ben; his name attests to his mother’s most heartfelt desire to be loved by Jacob, as Leah says, “the Lord has seen – “ra’ah” – my suffering and now my husband will love me” (Genesis 29:32). Reuben understands that his mother’s greatest attribute in her husband’s eyes is no longer there, because at this point in the story she has ceased to bear children (Genesis 29:35). So when Reuben finds the mandrakes in the field, he brings them to his mother as a charm to renew her fertility. 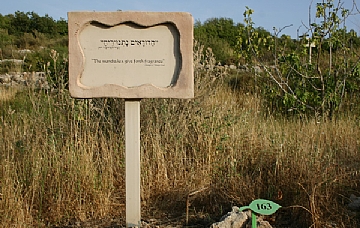 Leah is thrilled with the exchange and greets her husband when he returns from herding his flocks that evening telling him that “I have paid the payment for you (sachor-s’charticha) with my son’s mandrakes” (Genesis 30:16), and when a son, her fifth, is born of that night’s union, Leah names him Issachar because “the Lord has given me my payment (s’chari)” (Genesis 30:18).

Ironically, Rachel’s barter for the fertility-inducing mandrakes did not produce the immediate results she had hoped for because the birth of her beloved first son, Joseph, came only when “the Lord remembered Rachel and opened her womb” (Genesis 30:22), which was only after Leah bore not only Issachar but also two more children – a son, Zevulun, and a daughter, Dina.

One of the morals of this story is that the Lord determines what will be. It is reminiscent of the old adage “man proposes and God disposes”, reflected in the popular Hebrew poem by Itzik Mangar, “Abraham and Sarah,” in which the matriarch Sarah asks Abraham when she will finally bear children, and Abraham answers his beloved wife “Rest assured, my love, if Gods wills it, then even a broom can shoot (like a rifle).”

A 20th century postscript to the Biblical story of the mandrakes took place in 1916, when a young teacher of nature studies, Ephraim Rubinovich, teaching in Tel Aviv in the first Hebrew high school in the country, the Herzliya Hebrew Gymnasium, ran into serious trouble with the Ottoman authorities. Rubinovich went into hiding under an assumed name in Jerusalem, and later, at the invitation of the early Zionist thinker and leader Berl Katznelson, moved with his wife, Hannah, to Kibbutz Kineret, one of the first kibbutzim in Israel, where they stayed more or less in hiding. It was during this period that Rubinovich changed his name to Hareuveni. Ephraim and Hannah Hareuveni, who arrived in Palestine in the early years of the 20th century, during the Second Aliyah, were the parents of the founder of Neot Kedumim, Noga Hareuveni. 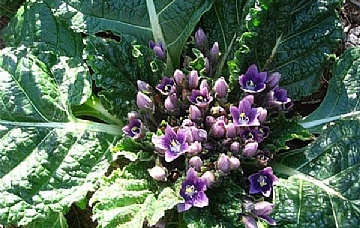 Ephraim Hareuveni’s choice of his new name was based on a midrash (Talmudic homily) regarding the birth of Leah’s two sons, Issachar and Zevulun, born after the bargain for Reuben’s mandrakes. According to this midrash, the tribe of Issachar were Torah scholars, financially supported by the trade generated by the tribe of Issachar’s brother, Zevulun. (Midrash Rabba, Parashat VaYetze) The Sages emphasized this ideal synthesis of study and work demonstrated by the tribes of Issachar and Zevulun, both “born” of the mandrake. In taking the name Hareuveni, Ephraim and Hannah were honoring paying tribute to Reuben who found the mandrakes that led to this symbiosis, and in doing so they personally demonstrated their commitment to the recognition of Israel’s flora as a bridge to our ancestors after centuries of exile.

The knowledge that mandrakes can be used as a fertility aid has been reinforced by modern chemical examinations that have revealed small amounts of human hormones in the mandrake. Many faiths and cultures have incorporated the connection between mandrakes and increased fertility. The 16th century Italian biblical commentator, Rabbi Obadiah Sforno, describes the mandrakes brought by Reuben in Genesis 30:14 as “a small, plant with a good smell that contains seeds that enhance fertility…so the mandrakes …were added to the love of a couple as it is written “there I shall give you my love (Hebrew: dod’ai), where the madrakes (Hebrew: duda-im) give off their fragrance…oh my beloved (Hebrew: dodi)” (Song of Songs 7:13-14). Sforno emphasizes the very close similarity between the Hebrew words for mandrakes and love. This simile is also found in the Zohar, when Rabbi Yitzchak says, “Do not read it as duda’im (mandrakes), but rather as ha-dodim (the lovers)” (Zohar, Midrash ha-Ne’elam part I (Genesis), Parashat Toldot, 134b).

There is an interesting botanical lesson to be learned from the juicy fruit of the mandrake that grows so close to the ground. As a general rule, we in Israel are much more familiar with the wild and cultivated fruit-bearing trees than with plants that grow close to the ground and produce fleshy fruit. Statistically speaking, only some 0.6% of Israel’s wild fruit grow on bushes as opposed to 38.5% that grow on trees. The wide gap between the two kinds of fruit is due to the manner in which they are dispersed – birds have easier access to fruit growing on trees. After digesting the fruit, their droppings spread the seeds in the swath of their flight paths, thereby fostering greater propagation of the fruit trees. However, there are some low-brush fruit that are eaten and spread by mammals. These fruit are small enough to be easily eaten and have an enticing smell that attracts the animals to fruit such as our plant of the month, the mandrake, whose fragrance is described in Song of Songs 7:14.

At Neot Kedumim, visitors strolling through the Valley of the Song of Songs (Gai Shir Ha-Shirim) can see and smell these wondrous mandrakes, which awaken an awareness of this plant as a silent but dramatic player in the history of our forefathers.