“We will play with walnuts, Pesach is here!” – The opening line of this song is known by nearly every Israeli child, and it refers to a game with walnuts traditionally played at Passover. The origins of this game can be traced back 2,000 years to the time of Rabbi Akiva, and the game exemplifies the unique character of the Pesach Seder, which has left an indelible mark through the ages, transforming the Seder into an event that does not ‘pass over’ any who partake. The Talmud in Tractate Pesachim (109a) tells of Rabbi Akiva handing out walnuts and roasted grain to children to keep them awake and active in the Seder. Not for children only, Tractate Eruvin (104a) speaks of the women who played with the walnuts. And the Midrash Shir Hashirim Rabba (6,11) goes as far as to say that “the walnuts that were toys for babies were games for kings”

So why is the night of Passover not like all other nights? Because on this night we question, we dip, we taste and we sing, we recline to eat, we serve special food, and more. Unlike a normal meal during the year in which we simply sit and eat, the Pesach meal is a collection of deviations from the norm, an evening filled with special activities which transform the entire meal into an experience engraved on the hearts of all who partake. 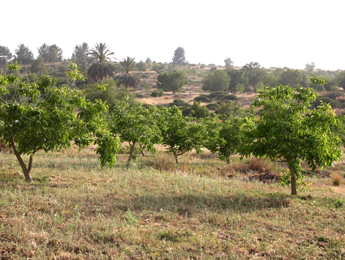 The Passover Seder replicates, among other things, an aristocratic ancient Greek meal, in which the diners would eat from a reclining position. At the end of the meal, the Hellenists would eat desert (or “afikoman” in Greek), which included walnuts. However, following the Mishnaic tradition of not eating desert after the Pesach sacrifice, the Talmudic Sages (Tosefta Pesachim 10,8) ruled that after eating one could not serve desert, such as walnuts, dates, and roasted grain – for the obligation is to concentrate on the laws of Pesach all night…” In his commentary to the Tosefta, scholar Saul Leiberman explains that it once was the custom to treat desert as a type of public celebration, which would often involve going from house to house and increasing the celebration. As this took away from learning the story of Pesach, our Sages rejected the custom.

The Mishna, Talmud and Tosefta all mention many of the various uses found in the walnut. The shells of walnuts and pomegranates are rich in pigments used in dyes and were therefore included in the list of fruit not to be sold commercially during the Sabbatical year. The ink derived from walnuts and pomegranates is also used for writing a get (Jewish divorce contract).

As with all nuts, the seeds of the walnut are rich in oil, which had several uses, including lighting. “Rabbi Tarfon said that (Shabbat candles) can be lit only with olive oil. Rabbi Yochanan ben Nuri rose and said…what will people do in Madai (Persia – modern-day Iran) where all they have to use is walnut oil…?” (Tosefta Shabbat 2,3). Rabbi Tarfon, who lived in Lod (very near Neot Kedumim), had an abundance of olive oil at his disposal, so he allowed only that, the finest of oils to be used for Shabbat candles. Others of our Sages were aware of the needs of Jews of the diaspora, where olive oil was not as easily obtained as it was in Israel, so they allowed other oils, including walnut oil, to be used.

The walnut has two shells providing double protection, thereby enabling the fruit inside to remain clean and “safe” even when the outer shell is dirty or damaged. This attribute has been compared by the Sages to the cleansing/atonement of Yom Kippur, teaching that sin does not emanate from the depths of a person’s heart, rather from his outer self, which is much easier to clean. The Sages said, “A walnut that falls in the dirt – if you pick it up, wipe it, rinse it and wash it, the nut is restored to the way it was and is good for eating. So too with Israel, when they are dirtied by sin all year long, on Yom Kippur they are cleansed (and restored to their original condition)” (Shir Hashirim Rabba 6,11)

The unique structure of the walnut, consisting of two parts connected to one another, has been used to symbolize fertility and to represent the relationship between a man and his wife. Because of this symbolism it was customary to throw walnuts at the bride and groom at weddings, a custom mentioned by the Talmudic Sages in Tractate Brachot 50b). While the inside of a walnut is very good to eat, in between the two edible halves is a bitter divider. This too correlates to a married couple, who have the ability to make their relationship either “sweet” or “bitter”.

Historically, the walnut is a cultivated plant in Israel, first imported from Persia and the Caucuses sometime around 200 BCE. Its first mention in the Bible is in Song of Songs, “I went down to the walnut garden to see the plants growing by the banks of the stream” (Song of Songs 6:11). As many historical works testify, walnuts have been cultivated in Israel for more than two thousand years. In his book “The Jewish Wars” Josephus, who at the time of the destruction of the Second Temple (late first century CE), wrote about the walnuts in the area of Ginossar (near the Sea of Galilee). In the year 985, the Arab geographer Al-Muqaddasi described the walnut trees that he saw in Jerusalem. In 1371, the judge Al-Otma’ani, who lived in Tzfat (Safed) wrote about the walnuts grown in Tzfat that were very easy to crack open. Ahmad al-Qalqashandi a Mamaluk official in the 14th century wrote an encyclopedia of the fruits in Israel, in which he included the walnut. During the British Mandate in the first half of the 20th century, walnuts were reportedly in Sh’chem (Nablus), Tzfat(1) and Hebron, although, there were not so many walnuts in these areas then or now.(2)

The common walnut (Juglans regia) is also known as the Persian walnut, California walnut and king’s walnut. It is a member part of the nut family, Jurylandaceae. The Latin family name Juglans is actually a combination of two words – Junca glans – which can mean either “covered acorn” or “acorn of the god Jupiter.” The species name, regia, is Latin for ‘king’ which is the origin of one of the modern names of the fruit, the king’s walnut.

During the year, the walnut tree, like many other deciduous trees, needs a period of cold weather with temperatures are lower than 8 deg. Celsius (approximately 45 degrees Fahrenheit) in order to insure the vital dormancy period that is “broken” as the weather warms and awakens the tree’s blossoming. When Noga Hareuveni, the founder of Neot Kedumim, was designing the “Valley of the Song of Songs” he explained his decision to locate it in the lowest geographic spot in the area because that was where cold air settled at night, creating the cold pockets necessary for the walnut trees to thrive and produce fruit. This low-lying tract of land where the walnuts grow at Neot Kedumim, enables visitors to literally feel the verse from Song of Songs “I descended into the garden of walnuts…” (Song of Songs 6:11)

The walnut is monoecious (male reproductive organs are separate from the female ones existing on the same plant), with ‘feathered’ leaves that contain 5-9 large leaflets and a very distinctive smell. The walnut blossoms in the spring and ripens in the fall. During blossoming the male leaves hang downwards looking like earrings. The female plants are grouped together on the ends of the branches and are pollinated by the wind.

The large amount of water needed to grow walnuts, as well as its susceptibility to many sources of damage, such as the leopard moth that burrows into the tree trunk, make it no longer commercially viable in Israel(3).

The walnuts at Neot Kedumim can be seen and even tasted in the “Valley of the Song of Songs” where you can also see several other plants mentioned in the biblical Song of Songs.

(1 )To this day one can see a huge walnut tree in upper part of Nachal Amud in the Ein Tina valley near Tafat
(2) “The Fruits of Israel”, Assaf Gur, 1974.
(3) “The Walnut Tree” (Hebrew) by Yitzchak Hal-Or, on the website Gan veNof