From the thorn comes good

The book of Exodus is rich with wondrous stories. When Moses first encountered God, his staff turned into a snake, and his healthy hand became leprous. Then, when Moses and his brother Aaron first met the upper echelons of the Egyptian government, his staff turned into an alligator that swallowed the staffs of the Egyptian sorcerers. Egypt’s pride was based, in part, on these sorcerers and their magical skills. So God’s miraculous acts opened the lines of communication with the Egyptians in a “When in Rome, do as the Romans” manner.

These acts were very different from Moses’ experience at the burning bush. This event, which forced Moses to go out of his way to see it, was not a ‘wondrous’ act. Moses said: “I will turn aside and see this great vision. Why is the bush not being consumed?” (Exodus 3:3)

The text describes a plant called a “bush” (Hebrew: sneh) on fire, yet surprisingly, the fire does not destroy it. The Talmudic Sages identified the plant as the holy blackberry (Rubus sanctus), a thorny bush with pink flowers. The English and Latin names (as well as the Hebrew) refer to the plant as “holy” (in Latin, sanctus and in Hebrew kadosh), which reflects the belief that this was in fact the plant through which God first revealed Himself to Moses. “This (burning) bush produces both thorns and roses,” our Sages taught (Shmot Rabba, 2:5), “just like the people of Israel that includes both righteous and wicked.”

Efraim and Hannah Hareuveni explained the Hebrew word for bush – sneh – through its prominent thorniness. They noted, as did our Sages, its similarity to the name of Mount Sinai. According to Pirkei de-Rabbi Eliezer,(1) from the sneh we get the name Mount Sinai, which is Horev (Pirkei de-Rabbi Eliezer, 41). Both sneh and Sinai contain the Hebrew letters samekh and nun. Replacing the samekh with the letter shin/sin, (not an uncommon occurrence) spells the word shen, which means “tooth” in Hebrew. According to the Hareuvenis, one of the physical features of Mount Sinai was its resemblance to sharp teeth. The same can be said of the thorns of the blackberry bush.

Noga Hareuveni, the founder of Neot Kedumim and the son of Efraim and Hannah, also identified the burning bush of Exodus as the holy blackberry. He added to the explanation of his parents the reference to the biblical book of Samuel 1, which describes a very “sharp-toothed rock” where Jonathan tried to go to the Philistines. The rock is called a seneh – and it contains the same samekh and nun that we also find in both the burnish bush, the sneh, and Mount Sinai.

Noga also explained the unique vision that Moses had as described in Exodus 3 as a combination of an optical phenomenon and an actual plant. According to him, the flames that Moses saw were a “fiery mirage,” a common phenomenon in the desert and the wilderness that often occurs when different density air layers refract light waves.(2)

Among other things, Noga based his explanation on the continuation of the Midrash in Shmot Rabba that teaches that the vision that Moses saw was only in the upper portion of the bush, which is very fitting, as mirages are often seen several inches above the ground.

The blackberry is a member of the Rosaceae (rose) family, and grows in the Mediterranean region and in damp areas and deserts near water sources. In Israel’s north, there is another member of the same genus – the wooly raspberry (rubus canescens). According to Pirkei de-Rabbi Eliezer, the uniqueness of the plant’s natural habitat is that “the bush is only found…where there is water underneath” (Pirkei de-Rabbi Eliezer, 40). Its long branches climb over other plants or create a thicket whose thorns hook onto them. Shepherds use the thorns to remove leeches.

Our Sages compared the hooked thorns of the blackberry bush to the experience of the Israelites who went easily down into Egypt. “A man can put his hand into the sneh without harm, because the thorns all face downwards. But when he tries to remove his hand, the thorns grab it and he is unable to take it out. So too the Egyptians received the Israelites very kindly, but later refused to let them leave” (YalkutShimoni 169).(3) 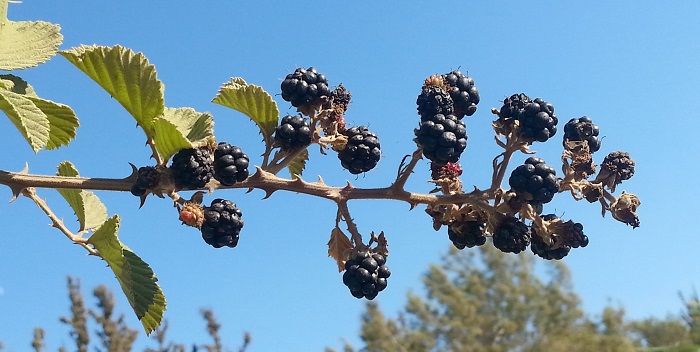 Because the blackberry bush grows in moist climates, its blossoming season is very long – from April until September. Parts of the plant contain substances with medicinal uses that can be used to treat wounds and infections. It can be boiled into an extract, syrup, or even an alcoholic beverage. The pink flowers are arranged at the end of the branches. The fruit, whose color ranges from red to black, is a clustered berry, which is succulent and very sweet.

The blackberry fruit has been compared in traditional Jewish sources to various other fruits. In his commentary of the Babylonian Talmud Pesachim 107a, Rashbam(4) classified alcoholic beverages that are made from fruits: “we make drinks from fruits of the sneh, like strawberries, and these are much more significant than the beverage made…from dates.”

The vision of the burning bush apparently remained engraved in Moses’ memory. At the end of the book of Deuteronomy, (read in the upcoming month of Tishrei), Moses blessed each tribe individually just before his own death. When he blessed Efraim and Menashe, the two sons of Joseph, Moses mentioned “the sweetness of the land and its fullness, and the will of He Who dwells in the sneh” (Deuteronomy 33:16). According to Rashi, Moses granted Joseph the blessing that “his land be blessed with the will and pleasure of the Lord, Who revealed Himself to me at the sneh.”

With the New Year upon us, as we soul-search the past year, we hope that the days ahead of us will be peaceful. Even when there are “thorns” on our paths, we strive for the strength and inspiration of Jewish history, and from our long, winding path that has contained more than just a few “thorns.” But hope, tenacity and perseverance characterize us, and provide us with the belief that “out of the strong came sweetness” (Judges 14:14).

The Midrash appropriately taught that “from the sneh comes a rose” (ShirHaShirimRabba, 6).

May the year of curses come to an end, and give way to a new year of blessings. Amen!

(1) A midrashic work attributed to Rabbi Eliezer ben Horkanus, late 1st century-early 2nd century CE.
(2) N. Hareuveni, Tree and Shrub in Our Biblical Heritage.Translated by Helen Frenkley. (Israel, Neot Kedumim, 1984), p. 39.
(3) YalkutShimoni is a comprehensive Midrashic anthology that was compiled in Germany in the 13th century.
(4) Rabbi Shmuel ben Meir (1085-1158) was a biblical commentator from Troyes, France. He was a grandson of Rashi. 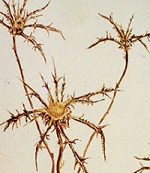 A special study day about thorns in agriculture, folklore, art and
parable will take place on
Tuesday October 28, 2014.
Entry is free of charge.