Splendor, medicine and legacy, all in one fruit – Citron/Etrog (Citrus Medica)

The heady aroma of clementine heralds the start of the “citrus season” at the beginning of the month of Tishrei. Citrus fruit are among Israel’s most prominent agricultural branches, yet they are in fact “immigrants” that have been successfully integrated in the country.

The first of the citrus fruits to arrive was the citron, popularly known by its Hebrew name, the etrog. It is not mentioned by name in the Bible, but Jewish tradition determined that it is one of the “four species” associated with the festival of Sukkot. “And you shall take on the first day [of the Sukkot festival] the fruit of a goodly tree, date palm fronds, and the bough of a leafy tree, and willows of the brook, and you shall rejoice before the Lord your God seven days” (Leviticus 23:40).

Various interpretations have been given to the term “a goodly tree”, or ‘etz hadar’ in Hebrew:

In ancient Greek ‘hidur’ means ‘water,’ and, in fact, success in raising etrogs requires frequent, controlled watering.
The Hebrew root “h-d-r” means “exquisite” or “wonderful,” and in the biblical verse in both the Septuagint (2nd century BCE Greek translation of the Bible) and in the Vulgate (4th century CE Latin translation) the phrase is rendered “a goodly/exquisite tree.”
The Ramban(1) explained that the word “etrog” came from the Aramaic root “r-g-g,” meaning “a thing of beauty and pleasant to look at.”
The root is very likely Persian – ‘turunge,” very similar to the English word “orange.”
The root “h-d-r” may also refer to the fruit that “lives” (in Hebrew ‘dar’) on the tree constantly (in Hebrew, “tadir”). The etrog, unlike other fruit-bearing trees, blossoms and bears fruit throughout the year. Because of this unique trait, Rabbi Yehuda HaNasi, the redactor of the Mishna (2nd century CE) suggested calling the etrog tree “hadir” (an animal pen), instead of “hadur” (goodly), because, like a pen containing animals of all ages, the etrog tree produces fruit in all stages of development and growth.
The etrog originated in India. From there it found its way to Persia (modern-day Iran), Aram-Naharayim (modern-day northern Syria), Israel and Egypt. Archaeologists have discovered etrog seeds in Iraq (ancient Babylon) dating back to 4000 BCE, and etrogs were found in Egyptian tombs and wall murals dating to 1500 BCE.

We can learn about the antiquity of the etrog from Jewish sources. According to one tradition, the “Tree of Knowledge” in the Garden of Eden was an etrog tree. One basis for this tradition is the biblical description: “and the woman (Eve) saw that the tree was good for eating and a pleasure to look upon” (Genesis 3:6). In the Midrash, the Sages taught that one of the distinguishing features of the earliest trees was that all of their parts were edible. “Go and see which tree …can be eaten just as its fruit. You will only find the etrog” (Breishit Rabba 15, 8). In the time of the Mishna and the Talmud, it was customary to eat the sprouts and the young leaves of the etrog tree.(2)

Another early use of the etrog is found in the stories of social protests, when the people opposed commandments being fulfilled in a way that deviated from the norm. For example, the Sages tell us of a Sadducee(3) who poured ceremonial water over his feet in the Holy Temple rather than raising his hands as was the custom. According to the Mishna “the entire nation stoned him with their etrogs” (Mishna Sukkah 4, 9).
According to a talmudic story regarding permitted and forbidden marriages, “Rabbi Zera taught…a new convert is permitted to marry a mamzera (female bastard), and everyone stoned him with their etrogs” (Bavli, Kiddushin 73a). 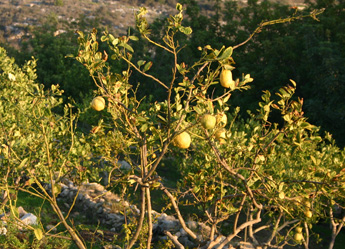 An etrog at Neot Kedumim

The scientific name of the etrog, Citrus medica, testifies to its many medicinal qualities, including as an antidote for poison, to fight bad breath, strengthen pregnant women, as well as cleansing and strengthening the digestive system. Studies even show that the etrog contains an antiseptic and rejuvenating substance that helps rebuild damaged teeth.(4)

Like other citrus trees, the etrog is an evergreen, and is part of the Rutaceae family. The tree is relatively short with many thorns. The fruit is shaped like an elongated egg, with a thick, rough, fragrant peel. Inside, the segments are much smaller than those of other citrus fruit. On the end of the fruit is a pitam, which is the external remnant of the fruit’s stigma. The color of the fruit varies from yellow and green.

At Neot Kedumim, the etrog trees are seen on the hillside of the “Garden of the Four Species.” This unique walking trail represents an idea mentioned by the Rambam(5), who said that the four species represent the journey of the Children of Israel starting with their departure from Egypt until their entry into the Promised Land. “It seems to me that the fours species…are symbol of rejoicing at leaving the desert – where figs, dates and pomegranates could not grow and where there was no water to drink – and arriving to a place with fruit-bearing trees and streams of water” (Guide to the Perplexed, 3, 43).

The trail begins at a group of date palms that rise up from the valley, as the Sages taught “date palms indicate a valley” (Babylonian Talmud, Pesachim, 53a). These trees represent Egypt and the desert oases. The trail continues by the willow trees lining the pond, symbolizing the Jordan River characterized to this day by willows, which the Israelites crossed to enter the Promised Land. The trail then ascends to a dense stand of myrtle bushes, symbolizing the hills that the Children of Israel saw covered with tangled thickets that had to be cleared before the land could be terraced and planted. The end of the trail is by the etrog trees, which, as delicate and sensitive plants with their abundance of fruit, symbolize the ultimate achievement of settled farming of the land.

This largest in the world is at Neot Kedumim.. It was entered in the Guinness Book of World Records in 2006

(1) A midrashic work attributed to Rabbi Eliezer ben Horkanus, late 1st century-early 2nd century CE.
(2) N. Hareuveni, Tree and Shrub in Our Biblical Heritage.Translated by Helen Frenkley. (Israel, Neot Kedumim, 1984), p. 39.
(3) YalkutShimoni is a comprehensive Midrashic anthology that was compiled in Germany in the 13th century.
(4) Rabbi Shmuel ben Meir (1085-1158) was a biblical commentator from Troyes, France. He was a grandson of Rashi.

The etrogs at Neot Kedumim were sprouted from seeds that were collected at the end of the festival of Sukkot. Because these etrogs are not grafted (hybridized varieties of the fruit), they are considered strictly kosher. The variety known as the “Yemenite etrog” that can grow to an impressive size and illustrates a story told of Rabbi Akiva(6), who “arrived at the synagogue carrying his etrog on his shoulder” (Babylonian Talmud, Sukka, 36b). In 2006, one of our trees produced an etrog weighing nearly 4 kilograms (8.8 lbs.) that made its way into the Guinness Book of World Records!

Alongside the etrog trees is an aqueduct that is their primary source of water. The quantity of water the trees need supports one of the earlier mentioned interpretations of the term ‘etz hadar’ (‘hidur’, water in ancient Greek). Growing etrogs demands a great deal of delicate work, including careful pruning of the branches so as not to damage the fruit. The trees are susceptible to many lethal diseases and fungi. The first etrog grove at Neot Kedumim was destroyed by one such fungus.

The etrog has many attributes and it represents the ancient legacy that the Jewish people have preserved. We know of a letter written by Bar-Kochva at the height of the revolt he led against the Roman Empire (132-135 CE). In the letter to Yehuda Bar Menashe, Bar Kochva requested lulavs (date palm fronds) and etrogs for his soldiers to fulfill the commandment of Sukkot.

We also know of many touching stories in which etrogs were brought from Israel to faraway Jewish communities – often in unconventional ways – that created great excitement for those who were able to hold them, including several modern cases in which Jews isolated behind the Iron Curtain of the former Soviet Union were unexpectedly able to perform the mitzvah of lulav and etrog.

May you all have a festive month, a Shana Tova, and a joyous and peaceful Sukkot.

(1) Ramban was the acronym for the medieval biblical commentator Rabbi Moshe ben Nachman, also known as Nachmonides (1194-1270).
(2) Y. Felix, “The World of Biblical Flora” (Hebrew) p. 68. Felix cites the Jerusalem Talmud, which states that “when you eat an etrog, the blessing is borei pri ha’etz (for the fruit of the tree), when you eat the sprouts, you bless bore iminei desha’im (for the various grasses)” (YerushalmiKela’im 27b).

(3) The Sadducees were one of the two important Jewish sects in Jerusalem during the Second Temple period. They were primarily the priestly elite in the Temple that rejected the Oral Law of the Sages and interpreted Torah very literally. They were opposed by the Pharisees, who are considered the spiritual “forefathers” of modern Judaism. The Sadducees have been often referred to as the spiritual “forefathers” of the Karaites.
(4) The modern-day rabbinic authority, mystic, commentator and Jewish leader, Rabbi Yosef Haim of Baghdad (1909-1983) wrote, among other things “The Wonders of Your Deeds.” There, he wrote that “the etrog is pleasant to look at and good to eat, with many wondrous qualities. The peel alleviates internal pains and strengthens the tendons when brewed like tea and drunk, sweetened with sugar or honey. Though bitter, it is very good for the body. Eating the etrog is good for the liver and is thirst quenching. The etrog seeds are good for everything. The entire fruit gladdens the heart and strengthens the body, and can cure any illness.”
(5) Rambam was the acronym for the biblical commentator Rabbi Moshe ben Maimon, also known as Maimonides (1135-1204).

(6) Rabbi Akiva was considered one of the most important of the Sages from the Mishnaic period. He lived in the early 2nd century CE.