On Love and Hate

Wine, milk and honey as cultural symbols in the Song of Songs

Since the beginning of mankind, the land of Israel has been home to two distinct cultures in constant conflict with one another. On the one side were the farmers, permanent residents of the land who dwelled in the mountainous regions; they owned fields, homes and vineyards. Opposite them the shepherds were continuously migrating from place to place in search of grazing for their flocks. They lived in tents and wandered with their flocks in the desert, uncultivated fields, thickets and forests.

In periods of good rainfall, farmers and shepherds peacefully co-existed, each staying where his livelihood was. However, times of drought upset this delicate balance as the shepherds brought their famished flocks in search of food to graze in the mountain fields and vineyards, destroying them in the process. The hostility and distrust between the two have existed from time immemorial, when Cain, the first farmer, “rose up and killed” his shepherd brother Abel (Genesis 4:8). The very names of the world’s first brothers provide an insight to the hatred destined to exist between them.

Abel, in Hebrew Hevel – means vapor, or breath, something that evaporates and quickly disappears. This represents how the farmer views the shepherd, who, having taken his needs from the land, disappears with his flock, thus avoiding the burdens of permanence, such as government and taxes.

The name Cain, in Hebrew Kayin – shares a root with nest (ken) and possession (kinyan). The farmer stays on the land which is the source of his food, the land he possesses. To the shepherd, the farmer is a wealthy, drunk property owner, as described by Isaiah “Woe to those who rise early in the morning so that that they may chase strong drink; they continue late into the night, when the wine inflames them. They have the harp and the lyre, the drum, the flute and wine at their banquets” (Isaiah 5:11-12).

The cultural gap between the two is symbolically expressed through their choice of drink. Shepherds drink milk, never wine. When the prophet Jeremiah chastises the Israelites for abandoning the Lord’s commandments, he publically offers wine to a family of shepherds in order to demonstrate the meaning of true devotion to the wayward Jerusalemites.

“And [the sons of Rechab] said ‘We will not drink this wine, for our father, Yonadav, the son of Rechab commanded us saying ‘You shall drink no wine – not you, nor your children until the end of days. Neither shall you build houses, plant seeds or grow vineyards, for you shall live your entire lives in tents, in order that you may enjoy long lives on the land upon which you dwell.” (Jeremiah 35:6-7).

To the sons of Rechab, wine is the source of trouble and moral corruption that shorten a man’s life. To these typical shepherds, house, field and vineyard all represent slavery.

On the other hand, to farmers, milk, butter and honey – the beverages of shepherds – represent death and destruction. The prophet Isaiah, who prophesized a harsh destruction for the agricultural settlements of the Land Israel, said “And it will be on that day that a man will raise a calf and two goats. And…due to their abundance of milk, he will eat butter; for butter and honey is what all who remain on the land will eat…And on that day, every place where once a thousand vineyards for a thousand pieces of silver were, will now be only briars and thorns.” (Isaiah 7:21-23).

“On that day” the vineyards will be destroyed and the vintners will become the very shepherds that they loathe. No longer will they drink wine, but milk and honey, for their vineyards will be grazing land for sheep and cattle. The honey referred to is that of wild bees that live in forests and fallow fields – that is to say, grazing areas naturally accessible to shepherds. For farmers, “honey” is from fruit, like the date honey of the seven species of the Land of Israel, but that disappeared with the destruction of agriculture…

In the Song of Songs:
Many interpretations have been offered for the Song of Songs. The Talmudic Sages see the book as an allegory for the love between God and the Children of Israel. Others see it as a collection of love stories, with or without the story line. In any case, modern scholars and traditional commentators alike agree that the love poems represent the dreams of the book’s main characters more than their realities.

Many linguistic connections exist between Song of Songs and Isaiah. “A thousand vineyards for a thousand pieces of silver” (Isaiah 7:23) appears (in a slight variation) in Song of Songs (11:11-12). The term of endearment Dodi, used often in Song of Songs, opened the prophet’s parable of the vineyard: “I will sing to my beloved, a song of my beloved (Dodi) and his vineyard” (Isaiah 5:1). Wine, milk and honey appear often in Isaiah, as well as throughout Song of Songs. All of this enables us to interpret the Song of Songs in a new light, emphasizing the backgrounds of the protagonists, the man and the woman.

The man was a shepherd, who came to Jerusalem with his flock (1:7). The woman was a vintner, apparently from a wealthy Jerusalemite family (1:6). A third figure in the book was King Solomon, who courted the girl, hoping to bring her back to his palace. This was either a reference to the King Solomon (to whom authorship of the book is commonly attributed), or the personification of the wealth and luxury that was the diametric opposite of the lowly shepherd (1:4; 1:12 and more).

The lovers continually missed opportunities to meet and to consummate their love – and it was not always clear what exactly kept them apart. When connecting the book to Isaiah, we might consider that the hostility between the culture of shepherds and farmers was a factor that separated them. Their own personalities, shaped by very different, even opposite cultural origins also sabotaged their love.

The shepherd could not “settle down” in a permanent location, nor could he keep his grazing flock inside the city (1:7-8). Instead, he wandered with his flock, and “like a gazelle or a deer”, went away and came back many times (2:8-12; 2:17; 8:14). Occasionally when he disappeared, the girl abandoned her dignity and good name and searched for him (1:7-8; 3:1-5). Yet he was an adventurer, and invited her to join him in his experiences. ”Come with me from Lebanon, my bride…see the view from the top of Amana, from the top of Snir and the Hermon, from the dens of lions and the mountains of leopards (4:8).

But the woman was “a garden locked, a spring sealed up” (4:12), chained within the walls of both the city and of tradition, unable to escape them without suffering a punishment “The city guards found me, and they struck and wounded me and took my veil from me” (5:7). So she invited him to her cultivated, inhabited world of vineyards and villages, where she will pledge her love (7:12-13)

The honey, milk and wine throughout the book emphasized the gap between the lovers. The shepherd promised the girl “honey and milk beneath your tongue” (4:11), but the vintner girl dreamt of the time when he would “bring me to the house of wine” (2:4). He wished to straddle both worlds, “I have harvested my myrrh with my spice; eaten my honeycomb with my honey; drunk my wine with my milk” (5:1), yet she could offer only her own, promising him “spiced wine to drink” (8:2). She hoped to present him to her mother’s house, yet she knew that her family would despise her for her choice of mate. (8:7).

The greatest missed opportunity for consummating their love was when the shepherd came to the woman’s house. Already in bed, she hesitated to open the door, so he left. He did not wait or persist, but vanished, as is the way of shepherds, and once again she goes in search of him.

The recurring motif “I sought but did not find him, called but he did not answer” (5:6) eventually caused the girl to surrender to chains of her own society from which she cannot escape. She submitted to her brothers and to their greed (8:11-12) and recognized that a love like hers with the shepherd was doomed. Like a wall, her life was inside a protected garden within the walls of the city (8:10). He, on the other hand, was like “like a gazelle or a deer” running on the hilltops.

At the end of the book he was with his fellow shepherds and begging her to allow them to hear her voice (8:13). Pained by her decision all she could say was “Run away, my love, be like a gazelle or a deer upon the mountains of spices” (8:14). 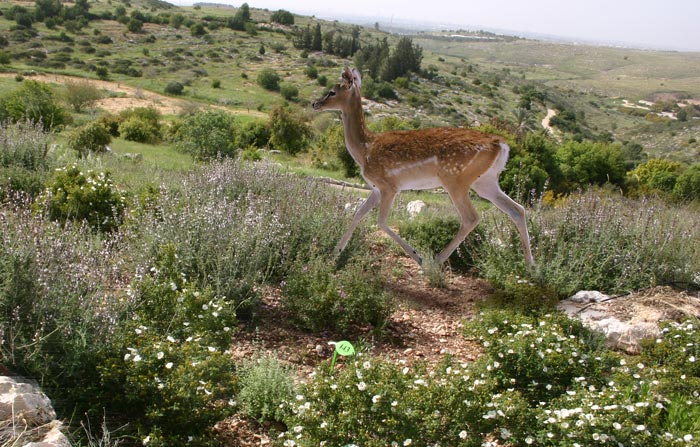