A new look at Hametz, Matza and everything in between

Home » index – Articles about biblical food » articles – yellow – A new look at Hametz, Matza and everything in between

A new look at Hametz, Matza and everything in between

Exodus chapter 12 relates the story of the Exodus from Egypt. The Torah tells us that the Israelites left in such haste that they were forced to carry the dough on their backs because there was not enough time for it to rise. As a result, they was no time to bake bread and they were left instead with the flat unleavened matza (Exodus 12:39). In the book of Deuteronomy, the Torah teaches that we eat matzot on the festival of Passover as a reminder of the exodus from Egypt, “for in haste you left the land of Egypt” (Deuteronomy 16:3), and this is the accepted tradition to this day.

However, if the reason for eating matzot is for the sake of “remembering” the exodus, why is the prohibition against eating hametz (leavened bread) on Passover so extreme that the violator will be “cut off from the Jewish people” (Exodus 12:15)? And why is there not a similar dire consequence for not sitting in a Sukkah during Sukkot, also a reminder of our Exodus from the land of Egypt?

A closer reading of Exodus chapter 12 shows that the commandment to eat matza was given to the Children of Israel several days before the actual exodus, even before the last of the ten plagues that immediately precipitated the exodus (in verses 15, 17 and 20 and in subsequent chapters). In fact, the book of Exodus does not even connect the commandment to eat matza with the haste with which the Children of Israel fled Egypt. Rather, we are taught that “by the strength of His hand He took you out of there [Egypt], and leavened bread shall not be eaten” (Exodus 13:3-4).

That is to say, unlike the book of Deuteronomy, the book of Exodus represents the eating of matza as a symbol of the strong hand of God that brought us out of the land of Egypt. How is the hurried departure from Egypt forcing the Israelites to bake matza connected to the strength of the Lord? Does the book of Exodus, which is considered to have been written before Deuteronomy, contain a deeper explanation for the prohibition against eating hametz on Passover?

Bread was the essential food eaten in ancient times, and the Hebrew word for it, lechem, is also used as the general term for food. This importance transformed bread into something “holy.” Bread was also a cultural symbol, as is shown in the celebratory meal that Joseph served his brothers (Genesis 43), in which the bread symbolically reflects the gulf separating Joseph from his brothers and the Israelites from Egyptian culture, for Joseph’s servants set “the bread for him [Joseph] apart from the bread of his brothers because Egyptians were unable to break bread with Hebrews, it was an abomination to them” (Genesis 43:32).

Egyptians were farmers, each person permanently connected to his own tract of land. The Hebrews, on the other hand, were nomadic shepherds. An inherent enmity between these two occupations has existed since the beginning of mankind, from the moment that Cain, the farmer, murdered his brother Abel, the shepherd. From that time on farmers have always worried that shepherds and their flocks would spread out over their cultivated fields and destroy the crops (Judges 6, Isaiah 5 and more). The Egyptians reserved a special loathing for shepherds, dubbing them looters, plunderers, “habiru” – Hebrews (!?).

The bread that the Egyptians ate was leavened bread. Egypt was known as a land of grain and bread. Long before the Israelites came to Egypt, Egyptians had learned the secret of leavening bread, even discovering the secret to what we now call sourdough. They learned that “starters,” left-over dough that started to ferment, when added to fresh dough and allowed to sit in a warm place for a number of hours, would rise and, when baked, produced loaves of leavened bread. Bread can only be baked in an oven with a certain depth that can retain a consistent temperature throughout its interior. Evidence that the Egyptians had developed this technology is found in the remains of very large bakeries that have been found in Egypt from the period that the Children of Israel lived there.

Heroditus, the Greek historian from the 5th century BCE, relates that the Egyptians were “bread eaters,” yet Pliny, the first century CE Roman naturalist, relates that during that same period the rest of the world was eating unleavened breads and cereal porridges. In Egypt, bread was not merely food, but the basis of their entire economy. It was the standard of weight in commerce, payment for workers, priests and slaves, and offered to the Egyptian gods in religious ceremonies. 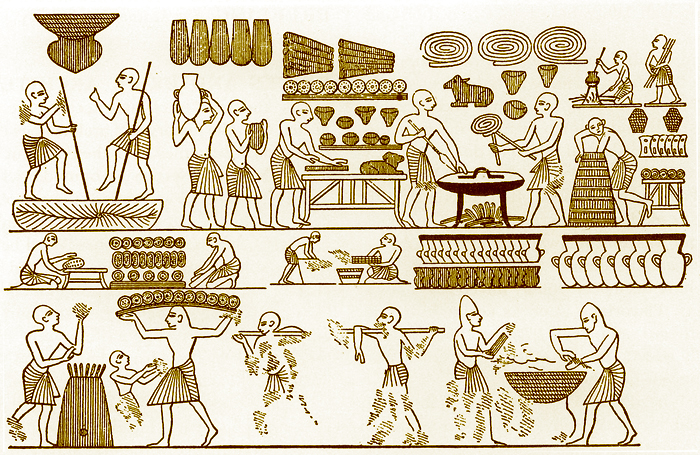 In contrast, shepherds ate unleavened bread. Nomads cannot carry a heavy oven with them as they travel from place to place, nor can they wait for dough to rise, as was the case when the time came for the Israelites to flee from Pharaoh and the Egyptians.

Matza is a coarse, basic food that by its very nature symbolizes liberty and freedom. Shepherds and nomads are not bound by the framework of rules and government. It is not possible to enslave nomads who own neither land nor house and who together with their flocks can disappear like vapor.

This helps us understand the severity of the prohibition against eating hametz on Passover. Eating matzot on the eve of the exodus was in and of itself symbolic of the transition from slavery to freedom; from the culture of slaves whose lives depended on the Egyptian leavened bread to the culture of matzot – the bread of free shepherds, our early forefathers.

Eating hametz during the Festival of Freedom is a rejection of all that matza represents: the freedom given to the Children of Israel by the One God, the God of our forefathers the shepherds, Who brought us out of Egypt with an outstretched arm. Just as God revealed Himself to Abraham, and took him from his settled pagan homeland to embark on a nomadic journey as a shepherd, so too He revealed Himself to Abraham’s descendants in Egypt, and brought them from the most settled and civilized land of that epoch, to lead them on their journey, once again as nomadic shepherds.